What’s the Difference Between Dashes and Hyphens?

Dashes and hyphens between words look so similar. How do you tell them apart? And, how do you know when to use each?

They are each a punctuation mark of a certain length. Plus, each one serves a different function.

You’re in the middle of writing a brilliant sentence when you find yourself confronted with the ultimate linear dilemma: To use a hyphen, an en dash or an em dash? Once you know the difference and when and why to use hyphens and dashes, you’ll write with confidence and express your meaning effectively to your readers.

Hyphen, en dash, and em dash punctuation help readers clearly understand your message by helping you indicate pauses and emphasis in your text.

Your writing is meant to connect with readers. Clear explanations help them engage with your narrative and content.

Using correct punctuation smooths the reading experience. You don’t want your reader to stop reading to check your punctuation. They may not come back.

Although each punctuation symbol—hyphen, en dash, em dash—is a line inserted into text, they perform different functions. Let’s look at how they work to make your writing as clear as possible.

PRO TIP: You need to know how to create these marks. Different operating systems, like Windows and Mac keyboards, place the symbols in different places. And WordPress users have a guide for creating your symbols on various keyboards.

How to Use a Hyphen

The hyphen is the shortest of these three punctuation marks. Use the hyphen to join two or more words together. Use no spaces before or after a hyphen. Modern online usage has eliminated hyphens in many previously hyphenated words: for example, email, nowadays. Consult an online dictionary for the current spelling.

A hyphen’s primary purpose is to link two words together.

When an adjective and noun combine to form a word, they are joined, and made distinct, with a hyphen. These joined words form an adjective that describes a noun. Hyphenate those two words when they come together to modify a noun. The compound word functions as an adjective to describe the noun.

Here are some common examples.

Compound adjectives go before a noun.

Examples of compound adjectives with a hyphen.

The high-speed train from London to Paris takes only 2 hours and 16 minutes.

The run-down apartment building looked unsafe for anyone.

These words are hyphenated to modify a noun and when used as adjectives, but not as adverbs.

She is a part-time French teacher.

Just to complicate matters, spellcheck and editing software cannot distinguish between compound adjectives and other uses, so you need to know your hyphen usage.

Many words are hyphenated to create clarity for readers:

Common prefixes that require a hyphen: self, ex, and all. Examples: self-expression, ex-president, and all-encompassing.

Let’s take a look at some examples of when you might need to use a hyphen: 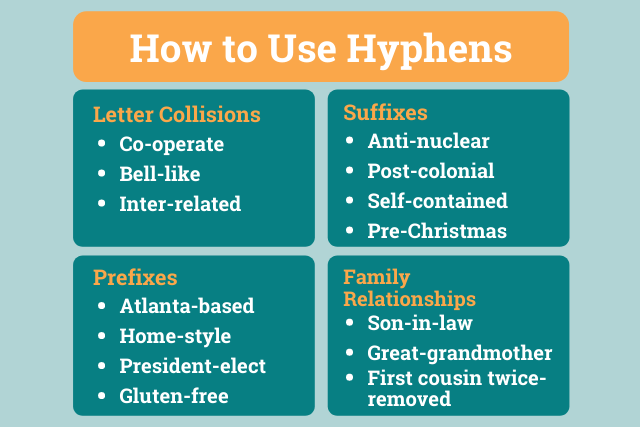 Examples of hyphens in prefixes:

Examples of suffixes. The most common are based, style, elect, and free:

Examples of family relationships with hyphens:

Use hyphens with written numbers from twenty-one to ninety-nine and with fractions like two-thirds or one-fifth.

On the other hand, speaking of a fraction like a third does not require a hyphen.

The hyphen’s main purpose is to glue words together.

If you want to make sure you’re using hyphens correctly every time, try ProWritingAid. Our Realtime report scans your work for grammar, spelling and style errors so you can fix them in a few clicks. If you miss a hyphen, ProWritingAid will let you know: 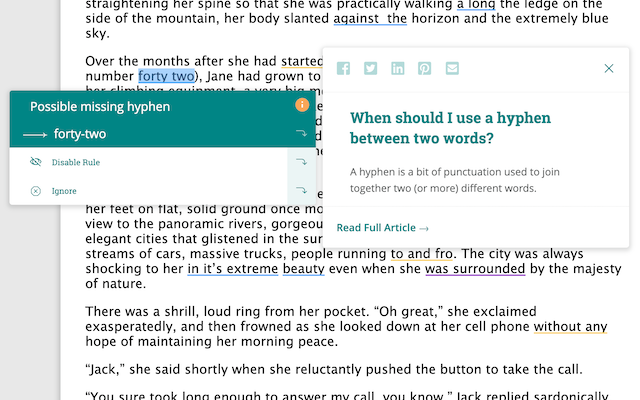 If you’re unsure whether to hyphenate, just click on the orange ‘i’ icon to return to this guide while you’re editing for a refresher.

Check your hyphens and other punctuation with ProWritingAid now:

ProWritingAid will also help you spot when you’ve used an en dash when you should have used an em dash. Let’s take a look at the difference between the two.

When Should You Use Dashes?

While hyphens glue words together, dashes indicate a series or sequence or they set phrases apart.

Dashes work to bring attention to a phrase or indicate a phrase as additional information. Like other punctuation marks, dashes are indications of how a reader may think about information.

The Short Dash – The En-Dash

Primarily the en dash connects numbers and sometimes words to indicate up to and including (or through).

The en dash comes to the rescue when connecting hyphenated phrases in a compound adjective (see above) or two open (without hyphen) compound phrases, like these:

Notice that there are no spaces before or after the en dash.

The Long Dash – The Em Dash

The em dash sets phrases apart from the main body of a sentence. Often called simply the dash, you want to use them with discretion, especially in business writing. Its the most commonly used dash.

In casual writing, like blogs and narrative fiction, the em dash gives a personal feel to text in contrast to more formal punctuation.

An em dash is used to set off text that amplifies or explains an element in a sentence. Commas, parentheses, or a colon may perform a similar function. Use the em dash to emphasize your amplification:

The following are specific uses for the em dash. You have a choice between traditional punctuation, often perceived as formal, and using the em dash. 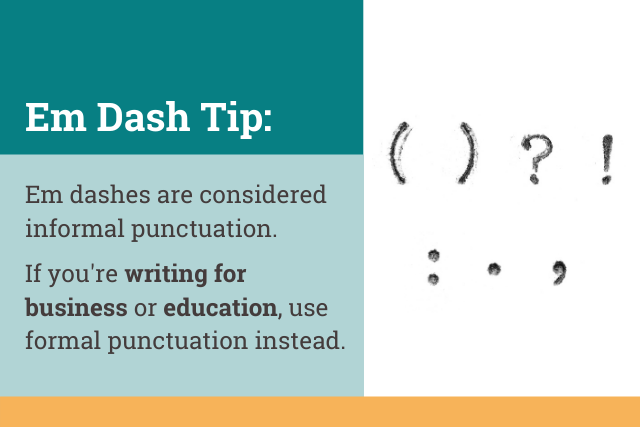 In Place of Commas

The em dash can take the place of a comma to set off a phrase in a sentence. If you choose the em dash, don’t also use a comma.

Use an em dash to set off an appositive, extra clarifying information, that includes a list separated by commas.

Example of em dash for an appositive including commas:

As an Alternative to Parentheses

Depending on your writing style and audience, you can use an em dash as an alternative to using parentheses, to enclose information that clarifies or is used as an aside or additional information. The dashes can increase the focus of the material they separate in the sentence.

Examples of em dash as an alternative to parentheses:

The Chicago Manual of Style (CMOS) recommends using parentheses or commas if more than one element is set off in a sentence. In other words, don’t use the em dash within or immediately following another element set off by an em dash. You’ll avoid confusion.

Examples of multiple elements set off in a sentence:

The Stay Safe conference—which had already been interrupted by three demonstrations (the last bordering on violence)—was adjourned promptly.

The Stay Safe conference—which had already been interrupted by three demonstrations, the last bordering on violence—was adjourned promptly.

Simply put, use one set of em dashes per sentence.

Use the em dash to replace a colon, especially when you want to emphasize the conclusion of your sentence.

After weeks of sequestered deliberation, the jury reached a unanimous verdict—guilty.

To Separate a Subject from a Pronoun

Use the em dash to separate a subject, or a series of subjects, from a pronoun that introduces the main clause. We’re getting deep into grammar terms here, but examples will help you understand.

When a question mark or an exclamation mark occurs in a sentence, set the phrase off with an em dash.

Examples of em dash with other punctuation.

To Indicate a Break

Use an em dash in dialogue to indicate a sudden break or turn of thought. 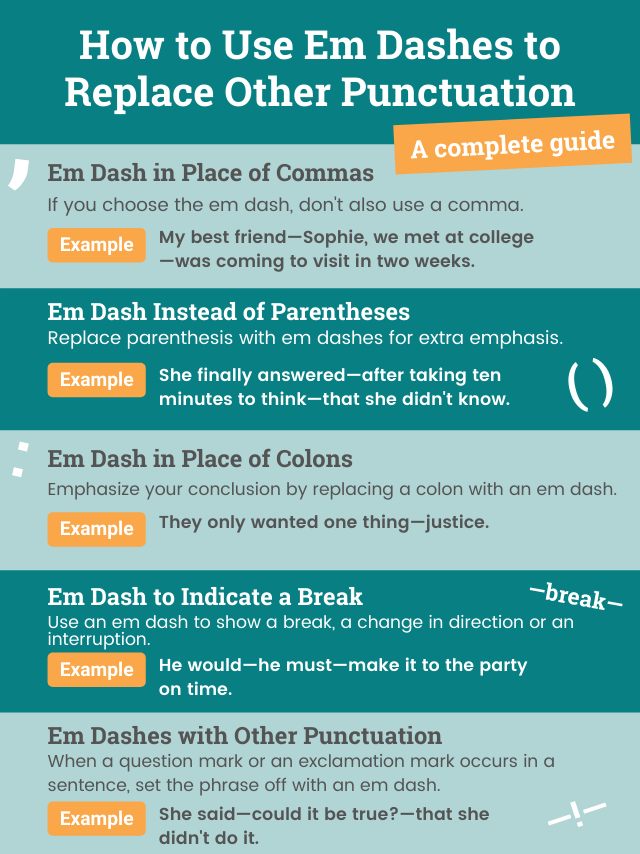 Journalism uses Associated Press (AP) style guidelines. Journalism requires spaces before and after an em dash, unlike most American usage.

When he called his cats — Pinot Gris Gris, Merlot, and Copainée — everyone in the dorm showed up at his door.

The insurgents used a variety of weapons — guns, pistols, revolvers, rifles and (semi-) automatic weapons — in the attack on the palace. 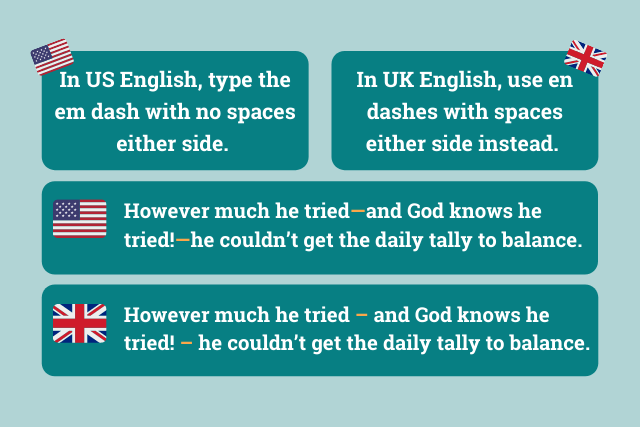 UK writers have a different use standard. Use a spaced en dash instead of the closed em dash.

American: However much he tried—and God knows he tried!—he couldn’t get the daily tally to balance.

United Kingdom: However much he tried – and God knows he tried! – he couldn’t get the daily tally to balance.

Notice that the en dash is separated by spaces, but the em dash has no spaces before or after.

Details Give You Clarity

Writing is all about clarity to help readers understand your business and connect to increase sales, engage readers in articles, or create enticing fiction. Getting grammar details right helps you communicate effectively. From connecting words and concepts to setting off information, correct usage of hyphens and dashes keeps readers focused on your message.

When you submit articles, white papers, or manuscripts for publication, your correct usage will help spur acceptance, putting you ahead of your competition.

With hyphens and dashes, spellcheck and editing software may misinterpret your meaning. When in doubt, check a current dictionary and a style guide like the Chicago Manual of Style. Hyphen usage fluctuates. Knowing the current accepted standard will help you write a well-composed article.

Your best rule of thumb—hyphens join and dashes separate.

Use Hyphens, Em and En Dashes Correctly Every Time